Being Human, BBC Three’s award winning and critically-acclaimed drama, returns for a fourth series. Following the gripping series three finale in which viewers watched Mitchell fall victim to the wolf-shaped bullet, series four sees the aftermath as the housemates return to their home in Barry Island. There are also some new faces in town…

Every year we set ourselves the task of creating something bigger and bolder and better than anything that’s happened before. We knew this year was going to be especially tough because of the various cast changes. Not only would it be our first series without Aiden, but Russell had decided that series 4 would be his last, and Sinead had decided that her Being Human journey had come to an end after series 3. The mountain before us seemed even higher than usual.

But once we’d stopped rocking and shaking, we saw Series 4 as an opportunity: we could invent new characters, expand the show in different directions, create new worlds and monsters and heroes, and add new layers to the overarching Being Human mythology. Suddenly Series 4 was a genuinely thrilling prospect.

But the essential DNA of show remains the same. Recently I found the pitch document I wrote for series 1. This was the opening paragraph:

“We’re the stuff of nightmares. And we’re your only hope. George, Mitchell and Annie yearn for their vanished humanity. Being Human is a unique twist on the aspirational drama, as the things Mitchell, Annie and George struggle to achieve are so common place and normal to us, yet impossibly remote to them. And the desire to be accepted by their old lost race will drive them to acts of immense courage, and foolish hazard. Our heroes may be like characters that have tumbled from the pages of a book, but their problems are always recognisably human, and the stories will strike a balance between the supernatural and the domestic.”

This was for our and the BBC’s eyes only. Hence the rather self-conscious ‘pitch-speak’ (and the odd contradiction. The characters are remote from us, yet share our problems? What? Shut up, Toby. Seriously. Stick to dialogue and stage directions.)

Obviously, a lot can happen in four years. But looking back at it now, I’m relieved to see that those words are still relevant for a show that has a new cast, a new location, an American reincarnation and expanded beyond our wildest dreams.

As ever, Being Human lives or dies on the strength of the characters and the cast, and that’s why I think this series is our strongest yet.

Damien Molony joins the team as Hal. Hand on heart, I think he’s one of the most exciting and versatile actors of his generation. Watching his performance grow over the filming was a joy.

Then there’s Michael Socha. Promoted from semi-regular to lead. If you thought he was good in series 3, wait till you see what he does in series 4. Michael will break your heart this year.

And of course beautiful Lenora. Our star. The heart of the show. This year she gives a truly breathtaking performance. One of my favourite moments of 2011 was the first full screening of episode 2, when she left us all with our jaws on our chests.

As I said earlier, Russell and Sinead felt it was time to hang up the wolf ears and fangs. We were obviously very disappointed to see them go, but as I’ve always said about our cast, you can’t hang on to actors that good forever.

I’m reminded of a moment in series 2, when George is talking about moving in with his girlfriend. Annie is devastated, but Mitchell knows that there’s not much they can do. Then Annie leans across to Mitchell and mutters: “We have a cage…” Believe me, the thought did occur to us too.

So what have you got to look forward to?

We introduce you to a new type of supernatural creature (thank you, Wikipedia); there are some stunning guest appearances from Alex Jennings, Mark Gatiss, James Lance, Mark Williams, Amanda Abbingdon, Craig Roberts (reprising his role as teenage vampire Adam), Selina Griffiths and Ellie Kendrick; there’s a genuinely shocking death, and we take you to somewhere we’ve never been to before.

News of Russell’s departure – and to Aidan’s before that – was greeted with rather wearying predictions that the show was now ‘over’. But I write this a few days after seeing the finished cut of episode 8, and I’m happy to report that it’s never been in ruder health.

The new cast, the crew and directors and the other writers have pulled off something extraordinary and completely reinvigorated the show. I hope you’ll agree, rumours of Being Human’s death have been greatly exaggerated. 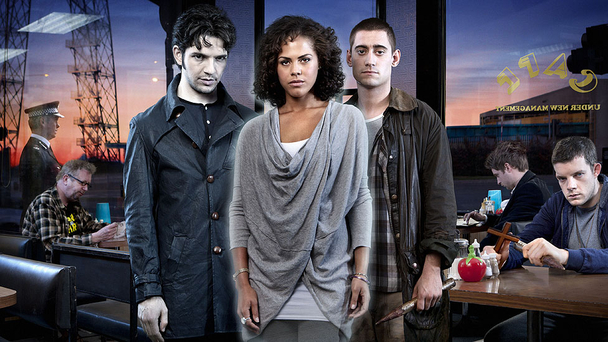